Written by Catherine on Friday 27 January 2023 in Japanese pens

Bush Clover, Hagi in Japanese, has been one of the seven favorite flowers of Autumn since antiquity. It grows naturally in the mountains and decorates the most beautiful Asian gardens of today, such as that of Mukôjima Hyakkaen in Tokyo. It is  appreciated for its gentle, wild, and unpretentious beauty. More than 100 poems are dedicated to it in the oldest book of Japanese poetry, the Man’yoshu, dating from the 7th century. 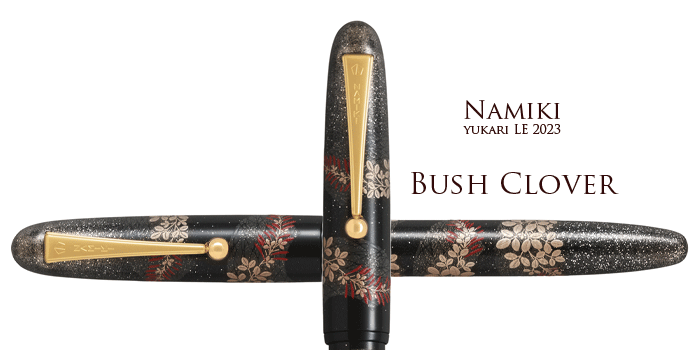 On the Namiku Yukari Bush Clover Yukari limited edition fountain pen, the shimmering Hagi is illuminated by moonlight and delicately treated in silver Maki-e and red lacquer. In the background, the undergrowth takes the form of magnificent traditional fans realized with a grey lacquer and gold powder.  This fountain pen will be distributed in 300 copies worldwide but only 70 pieces are available for Europe. Expected April '23!

Sailor Nihon Ookami to Gekkou or Wolf in Moonlight!

Written by Catherine on Wednesday 7 September 2022 in Japanese pens

Written by Catherine on Wednesday 9 February 2022 in Japanese pens

Sailor is proud to present the third fountain pen Samurai King of Pen Battle of Itsukushima. Ikki Moroiki realized a beautiful Maki-e animated fountain pen in Togidashi Taka Maki-e. This piece of art comes in an urushi lacquered box with a Maki-e design. Only 33 pieces worldwide.

Written by Catherine on Saturday 27 November 2021 in Japanese pens

The well-known artist Ms. Etsuko Tsurata, once apprentice of the Famous National Treasure Mr Shogyo Oba, created the Sailor Chinkin Owl using the Chinkin technique. The result is a painstakingly crafted bird of wisdom of which each feather can be individually viewed! The ineffable shape of the Sailor Chinkin Owl is created using silver and gold powder. The delicate flowers are made using the same Chinkin technique and colored with Kansitsu powders.

Written by Catherine on Wednesday 23 June 2021 in Japanese pens

Something new from Japan: Taccia Hyakko-Hisho fountain pens! These sleek and a bit longer pens are made of ebonite with a hexagonal or round body and decorated in a Kawari-Nuri lacquer layer. Sailor makes the 14kt duo-tone nibs. Therefore the pens are filled with Sailor ink cartridges or a converter. Each Hyakko-Hisho fountain pen is limited to 50 pieces per design and comes in a nice Paulownia wooden box with pen kimono, two cartridges, convertor, and cleaning cloth.