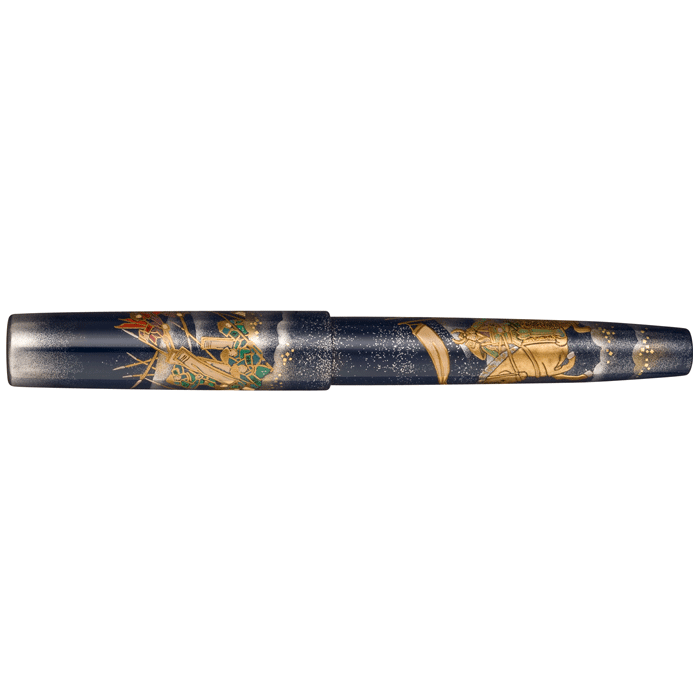 The Battle of Sekigahara.

Shogun, Daimyo, and Lords have gathered their armies at either side of the river. Some of them deceivingly undecided about which side to choose. Others will change camps in the heath of the battle. About 200 000 warriors are ready to fight the Battle of Sekigahara. Half of them will be perished by the end of the day.

Sailor commissioned Ikki Moroike to create a first limited edition pen "The Battle of Sekigahara" in high-end Maki-e to commemorate this important historical event. He made 28 fountain pens in Togidashi Taka-maki-e with sublime techniques. Each pen is offered in a lacquered box with Maki-e design on the lid.

The Battle of Sekigahara was probably the most famous decisive Samurai battle that led to the establishment of the Tokugawa shogunate.

In 1590 Toyotomi Hideyoshi unified Japan and exerted power and influence. He had two major rival factions, one led by Tokugawa Leyasu and the other Ishida Mitsunari. After the death of Toyomi Hideyoshi, the relationship between the two groups deteriorated significantly.

In 1600 Sekigahara, which divides eastern and western Japan, became the battlefield fought between the Eastern Army of Tokugawa Leyasu and the Western Army of Ishida Mitsunari.

The Eastern Army consisted of 80 000 soldiers, including famous Samurai Lords such as Kato Kiyomasa and Fukushima Masanori, who did not like the bureaucratic Ishida Mitsunari. The Western Army had 120 000 fighters, including famous samurai Lords such as Mori Terumoto and Ukita Hideie. Tokugawa Leyasu concluded secret agreements before the battle with some of the Western Army going over to the Eastern Army.

The turning point was Kabayakawa Hideaki’s treachery. Kobayakawa, who owned many soldiers, has also received the offer to switch sides. He and his army changed sides to the Eastern Army once he came under attack from Leyasu’s warning shots. Other samurai Lords who initially fought against the Eastern Army followed Kobayakawa’s decision and attacked the Western Army.

The Eastern Army led by Tokugawa Leyasu won the battle, and later in 1603, he was appointed Shogun by the Emperor. In this way, Tokugawa Leyasu gained the power to rule the entire country, and the Tokugawa Era lasted two and a half centuries, thus securing peace and prosperity. The Battle of Sekigahara is regarded as the last battle in the age of civil wars in the long history of Japan.