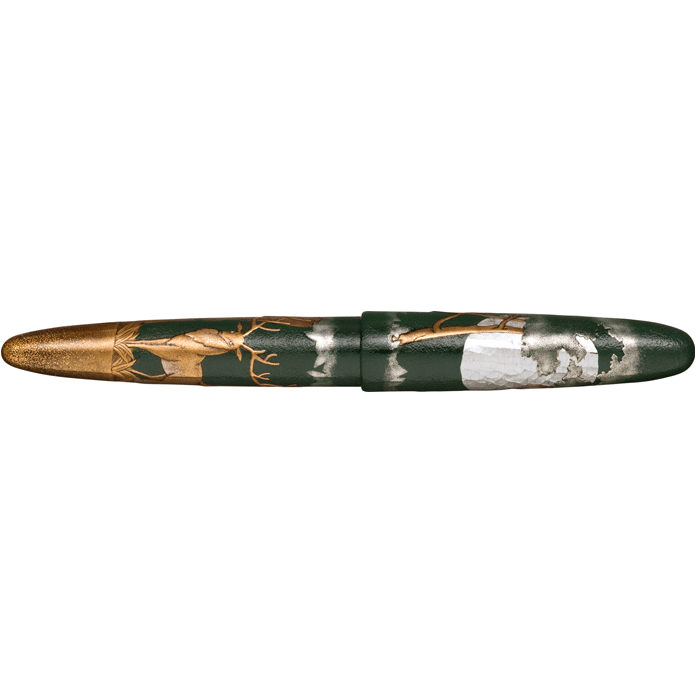 'The proud Antler Stag stands tall in the moonlit forest. Al is calm beneath the light of the Silvery Moon.'

Sailor is pleased to announce a new series of limited edition maki-e fountain pens entitled 'Dobutsu to Gekkou' or 'Animals in the Moonlight.' The first model in this series by artist Ikki Moroiki is titled 'Shika to Gekkou' or 'Antler Stag in Moonlight.' The pen comes in a pawlonia box with pen kimono, 2 cartridges, convertor, polishing cloth, and certificates.

This piece of art is executed in Togidashi Taka Makie with mother of pearl and a touch of raden for the eyes of the deer. The round moon is one big spot of mother of pearl dusted with silver powder to evoke nightly fog. The background of the pen is matt and has a slight ishime structure. At first sight, it looks black, but with changing light, it turns dark green! The reliëf stands out, giving the imaginary forest a certain depth and the visible logs and antlers of the deer are raised almost three-dimensionally.

The Moon has many influences on life on Earth, and Wildlife has adapted to its many effects. Moonlight itself has always fascinated humankind, and its unique artistic impressions have been well documented over time.

The artist Ikki Moroiki-san was born in 1962 in Ishikawa prefecture in Japan. After graduating from high school in 1980, he served his apprenticeship with Mr. Ikkou Kiyose, a famous Maki-e artist living in Kanazawa. He completed his time with Mr. Kiyose in 1986 and started his own business in Kaga city.

He is now a member of the following associations: