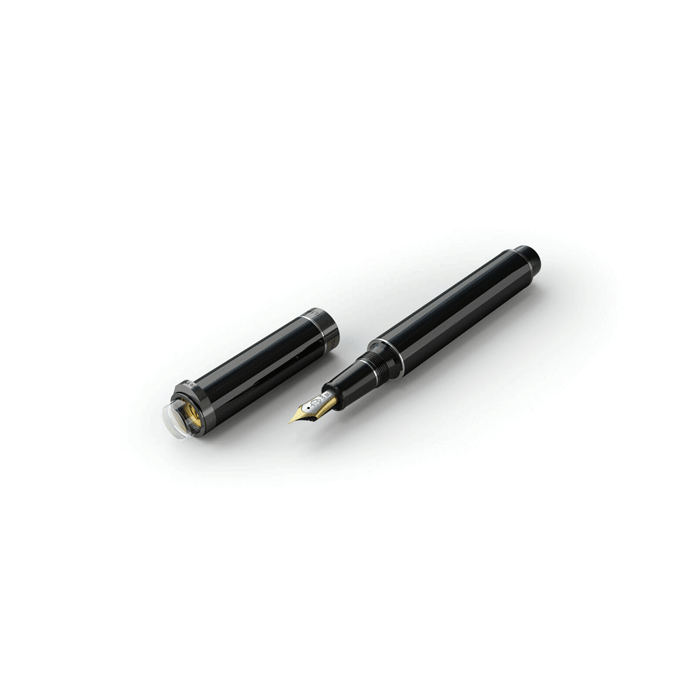 The cap of the Kurogane Pen holds the newly designed anchor as a symbol of Sailor's reliable quality, technical capability, and Japanese sense of beauty.  The decorative ring serves as a stopper to protect the clipless body from damage.

The shiny black body of the Kurogane pen is the result of a new electrolytic technology that enables a deep coloration while maintaining a metallic feel. It is durable and meant to last forever. The serial number is marked on the barrel ornament, and the new Sailor logo is engraved on the cap center band. The pen is comfortable in the hand, and the well-balanced design provides a natural writing flow.

The 21-karat gold nib is the result of Sailor's unique technology. The flexible nib is more resilient and does not run out of ink even under heavy pressure. It is engraved with Sailor's symbolic anchor and the 110th-anniversary memorial in the center.

The Kurogane pen comes in a box made of Japanese chestnut, known for its hardness, moisture resistance, and durability. The pen sleeve for the 110th-anniversary model is made of hemp cloth, becoming softer and more comfortable when in use.

The Sailor 110th-anniversary fountain pen is a commemorative fountain pen that symbolizes the future of Sailor fountain pen with its individuality and strong presence. It comes in three different styles, all of which are based on the three cornerstones of Sailor’s CI authenticity, technology, and design.