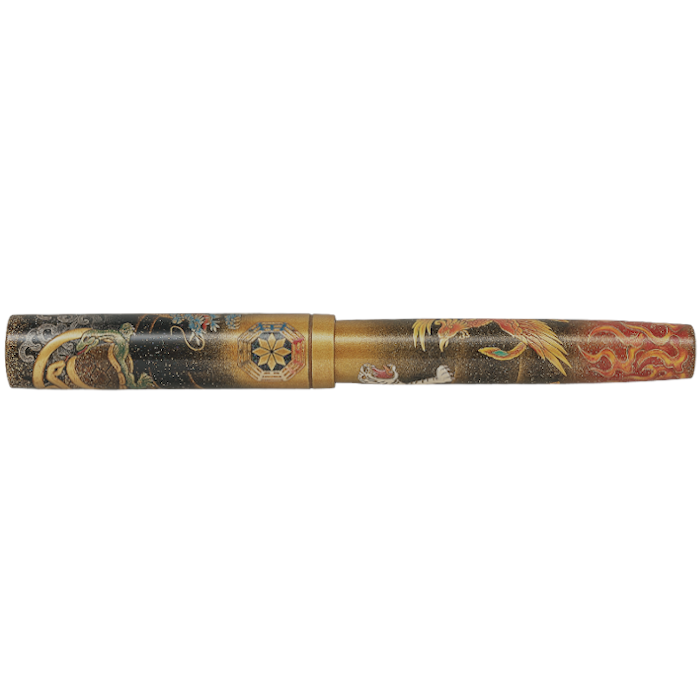 The Namiki Emperor Shijin Limited Edition 2020 will only be released in October '20. You're reservation will be delivered from October '20.

The "Shijin", traditional figures in Chinese mythology, are represented by four sacred animals, guardians of the four cardinal directions in Feng Shui art. Each "Shijin" is associated with a symbolic color and an element that makes up the natural world : wood, metal, fire, and water.

Seiryu and wood: A powerful dragon with the hooves of a deer and the body of a snake represented by a bright blue-green color. It protects the East, controls the element of wood and symbolizes wealth.

Byakko and metal: A spiritual tiger who has survived 500 years, represented by shades of brilliant white. He protects the West, governs metal and symbolizes fertility.

Susaku and fire: A magnificent phoenix, guardian of the South. Associated with shades of flaming red, it wields the element of fire and symbolizes beauty and intelligence.

Genbu and water: A turtle, eternally intertwined with a snake, it promotes human relations. Associated with shades of deep black, it is the guardian of the North, the mistress of the water and symbolizes longevity.

This Namiki Shijin Limited edition is limited to 99 pces for the world and will be released October 19, 2020. It is executed in togidashi taka-maki-e (raised relief) with hyoumon (gold inlay) and raden (abalone shell). This magnificent pen will be delivered in a black urushi lacquered box with ink bottle.