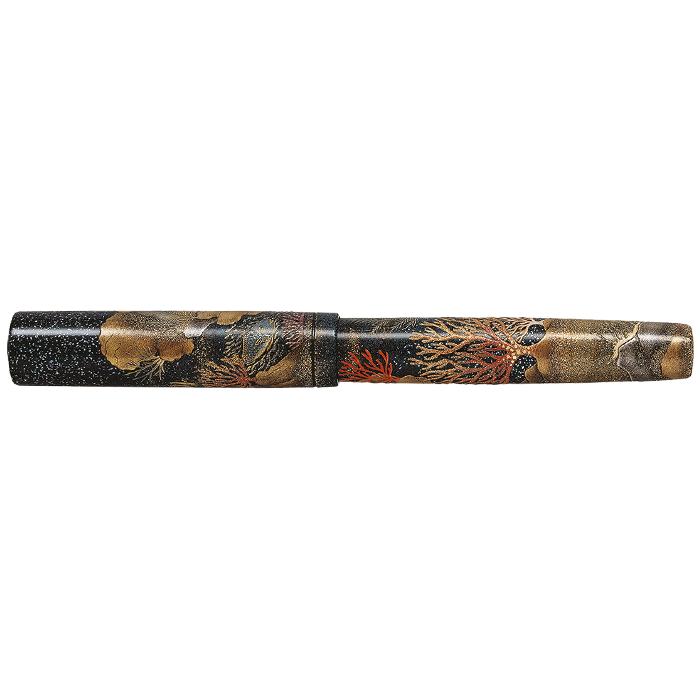 Open the lacquered box in the intense blue-black, characterizing the deep sea, and admire the underwater wonders and corals. Some have lived for more than 1000 years and have been regarded as good luck charms since ancient times.

Namiki deployed its most sophisticated techniques on the Namiki Emperor Coral (Sango) to sublimate the scintillating reflections of the ocean. They are expressed in Togidashi maki-e, raden, and taka maki-e. The serial plate and inkwell cap contained in the box is also decorated with underwater motifs. Ninety-nine limited editions of this Coral emperor are produced for the world and decorated by Kokkokai’s group craftsman, Seiki Chida.

Today precious corals around the world need more than luck. Climate is changing very fast, jeopardizing the great Barrier riffs, habitats for thousands of underwater creatures. We gaze at them on incredibly made documentaries, and we are amazed by their beauty and well-hidden secrets. This Namiki Coral, a high-end treasure in itself, emphasizes the precious life of the deep sea.

The Namiki Coral pen is made in ebonite and comes with an 18kt nib in M or B. It has an eyedropper filling system which takes about 7ml of ink. The pen is delivered in an urushi lacquered box with an eyedropper and a bottle of ink.