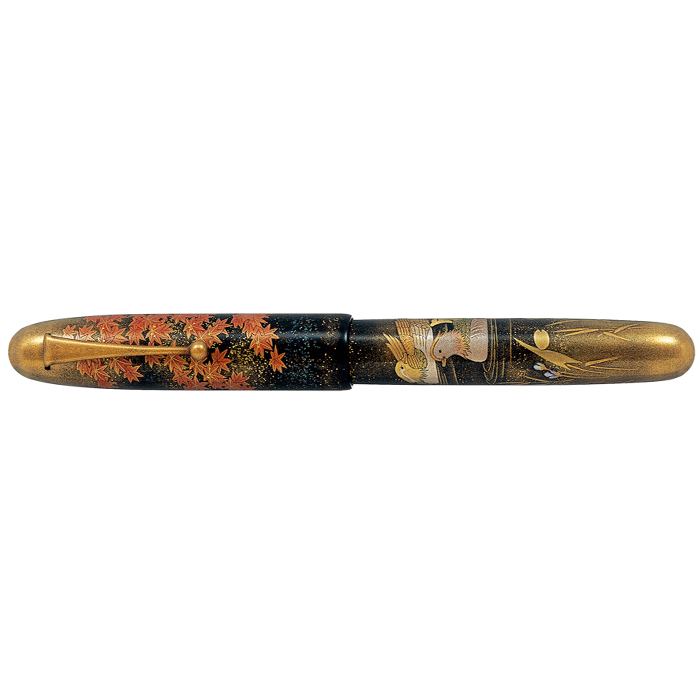 The Namiki Emperor - Oshidori – Mandarin Duck (2007) is an ode to love. It is adorned with a couple of Mandarin Ducks lovingly and peacefully swimming on a pond bordered with reeds and flowers, in a decor of colorful maple leaves. Mandarin Ducks originate from East Asia. They have much cultural significance in Japan and Korea. Oshidori (mandarin ducks) are small, colorful and can be found all over the world.

The Namiki Emperor Mandarin Duck is made in Togidashi Taka Maki-e. Top and bottom of the pen are bokashi sprinkled with 24kt gold dust. The cap is decorated with red maple leaves on a black urushi background and sprinkled with small abalone shells (raden) and gold particles. Abalone shell (raden) is used to decorate the flower at the border of the pond. Kirigane (square gold flecks) are attached to the waterlily leaf. Gold and silver dust are generously sprinkled on both ducks to highlight the beauty of their color pallet.

Mandarin Ducks are the only duck species that mate for life. Once they find a partner, they remain a couple until their death. They live for six to ten years, and some suggest they even have the potential to live twice as long. If one dies, the other one often disappears soon after. In Asia, they are a symbol of love, fidelity, and marital happiness. In Japan, they are a lucky charm and often gifted as a wedding present.

Namiki released The Mandarin Duck in 2007. It is kept a secret how many pieces are made since then. Namiki decided to end the theme with the mandarin ducks. This Namiki Emperor Mandarin Duck is the very last to appear in Europe. It can be yours tomorrow.